Having been passionately involved with horses since his first county fair pony ride thirty years ago, Mark has made horses his professional life for over seventeen of them.

During his junior and young rider days Mark rode in the equitation, hunter and jumper divisions at all levels.  Some of his accomplishments during this time were qualifying for the USET Young Rider Finals, winning the Syracuse Professional Horseman's Association Sportsmanship Award and placing second, twice, at the Zone 2 Medal Finals, not to mention the numerous championship and reserve championships in the Junior Hunters, Children's Hunters, Regular Working Hunters, Children's Jumpers and Amateur Owner Jumpers.  As a young professional rider, he brought along numbers of young and difficult horses, specializing in allowing these difficult horses to find their niche along the way.  He also spent that time catch riding anything that came his way.

More known for his instruction, coaching and from the ground training since being limited by a back injury, Mark has always had a passion for teaching.  He has brought riders and horses from their very beginnings up through their first Grand Prix's.  Mark has trained and qualified riders for USEF Medal Finals, Maclay Regionals, USEF Pony Finals, Intercollegiate Horse Show Association (IHSA) Nationals and various other championships in hunters, equitation, jumpers and three day eventing.  His horses and riders have also won many championships on the USEF Zone level in both hunters and jumpers.  In IHSA, he has coached the Wisconsin Equestrian Team to four top ten finishes at IHSA Nationals and nine Zone Champion or Reserve Champion titles.  For IHSA individuals he has also had multiple National and Reserve National Champions, along with countless top ten riders.

In addition, Mark has established himself as a top clinician and coach and regularly teaches clinics throughout Minnesota, Wisconsin, and Illinois. In the past he has cliniced at Equifest of Kansas and before the nationwide pandemic forced it cancellation was slated to be the featured clinician at the 2020 Trakehner Association North America (TANA) convention. He has served as an IHSA Regional President and currently serves as Chairman of the USHJA Zone 6 Committee.

Amy began riding at age 9 and began her show career while competing for the Intercollegiate Horse Show Association during her time spent at University of Wisconsin-River Falls, through IHSA she was involved in Regional Championship, Zone Championship and National Championship competitions, as well as spending two years as team captain and then assisting with coaching duties after her showing eligibility expired.  While pursuing and upon completion of a degree in Animal Science-Equine, she worked as a veterinary assistant for Dr. Bob Racich, DVM gaining valuable experience in handling and equine health care.

After moving to Madison in 2010, she moved from the .85 meter jumpers to the High Adult Amateurs to complete her amateur career showing in the Amateur Owner jumpers, achieving many wins in both professional and amateur classes, and championships and reserve championships, all with her Appendix Quarter Horse mare Gingerellie.

Amy began her professional career in late 2012. She has a true passion to develop and bring out the best in every horse that she works with, whether it be a young horse going over their first jumps, a quirkey horse finding their confidence, or the seasoned school master keeping their edge. She rides and competes multiple client and sale horses in both the jumper and hunter rings, along with competing her personal horses and willingly picking up catch rides. She has recently retired her past Grand Prix mount, Baloubet por Acaso, and is currently developing her 2 offspring out of Grand Prix stallion Ehrentanz KD Pg.

Amy also currently serves as a member of the USHJA Zone 6 Committee. 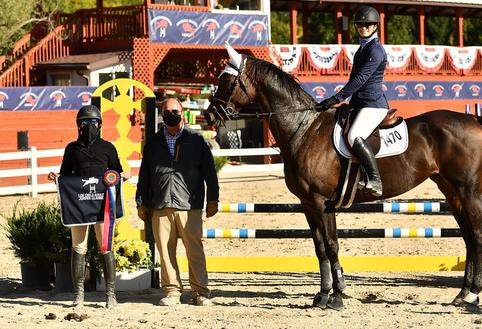